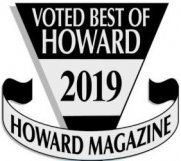 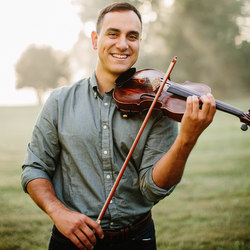 Nick Sungenis began studying music at the age of five with Mia Coyne on the piano, and began his violin studies at the age of eleven with Tecla Heuring Walton, and a few other teachers including Deborah Stotelmyer and Ronald Mutchnik. Throughout high school, Nick enjoyed playing with the community orchestra, summer music camps, and string ensembles through the Cumberland Valley School of Music; he also earned a third place merit scholarship from CVSM as well as two scholarships from the Maryland Symphony Orchestra. After playing with the Shepherd University Preparatory Orchestra during his senior year, Nick continued playing the violin in various places, such as a church folk group, youth group band, and with his friends in the Erik Christensen band, with whom he has recorded two albums - the second of which in 2012 at Dark Horse Recording Studio next to Nashville. Since then, he has played alongside several recording artists, namely Mike Mangione, Marie Miller, Kevin Heider, Alanna Boudreau, Kara Klein, Tori Harris, and Dave Moore; also with local artists Patrick Mahon, Joseph White, Corrie Dubyoski and others. In addition to concerts, festivals, and conferences, Nick has played for many wedding ceremonies over the years, and continues to play for his church every weekend. Nick graduated from Howard Community College and then Providence College in 2014 studying philosophy, and enjoyed playing as a soloist with his college orchestra during his senior year. Between his time at Mike's Music and teaching philosophy at HCC as an adjunct instructor, he is currently recording his debut album of original compositions (to be released in 2018). Nick is "thankful for the gift of life," and is strongly committed to teaching his violin and viola students the importance of good technique, music theory, disciplined practice, and most importantly: the joy of sharing music with others, and having fun!
Meg Jones
Teaches Monday, Tuesday, Wednesday, Friday, and Saturday 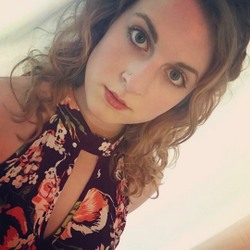 Megan (Meg) Jones began her violin studies at the age of 7 with Irina Briskin and later with late BSO violinist, John Merrill. While pursuing a BA at UMBC, Meg studied with Dr. Airi Yoshioka and enjoyed playing in the UMBC Symphony Orchestra. Meg has performed in chamber music festivals and masterclasses, most recently for Daniel Heifetz, and enjoys performing in various chamber groups as well as solo recitals. Meg currently studies with BSO violinist, Leonid Briskin. Meg’s teaching philosophy centers around technique, tone and musicality, while fostering a positive atmosphere! 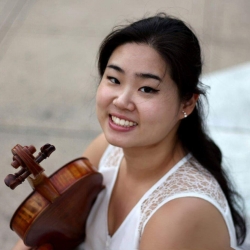 New York-based violist Jennifer Kim has been praised for her “dedicated involvement…and high level of skill in her music specialty.” She has been a musician her whole life. Jennifer started piano lessons at four years old, began playing as a violist at the age of eight, took voice lessons at nine years old, and since her early years, has played in various ensembles in the New York community and beyond. In 2013 and 2014, Jennifer was appointed Associate Principal and Principal Violist of the Peabody Concert Orchestra. Since 2015, she was a member of the Peabody Symphony Orchestra, and has played as the associate principal in the 2017-2018 school year. In April 2018, she performed as the principal violist of the Peabody Chamber Orchestra under the direction of Leon Fleisher. Jennifer’s most recent orchestral performances have been with the York Symphony Orchestra in York, Pennsylvania, under the direction of Lawrence Golan, where she has won the position of section violist. She has also performed with the Harrisburg Symphony Orchestra, where she plays as a substitute violist. Jennifer graduated from the Peabody Institute of the Johns Hopkins University in Baltimore, Maryland, where she received both her Master’s degree in viola performance, and her Bachelor’s degree in viola performance and music education under the guidance of Victoria Chiang. She is currently the Strings Director at Glenwood Middle School.
Andrew Juola
Teaches on Wednesdays 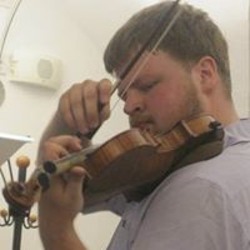 Andrew Juola holds a Bachelor of Music in performance from George Mason University and a Master’s of Music from the University of Maryland. He has attended collegiate chamber music and orchestral festivals including the National Orchestral Institute, the Bowdoin International Music Festival and the Orfeo Music Festival in Vipiteno, Italy. He names Peter Haase and James Stern as his most influential violin teachers. Andrew’s students have auditioned successfully for collegiate programs in music as well as in district and regional events at the pre-college level on violin and viola. He wants his students to discover a technique with which they can project their musical ideas through the instrument. Andrew performs frequently on violin and viola with orchestras and at other venues in Virginia, D.C. and Maryland.
CUSTOMER SERVICE

About Us
Site Map