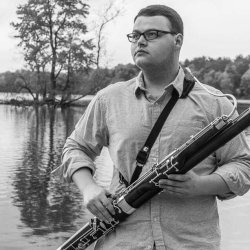 Collin Walter holds a B.S. in Music Education from Towson University and a M.M. in Bassoon Performance from the University of Delaware, where he had studied under the tutelage of Dr. Terry Ewell and Lynn Moncilovich, respectively.  Accolades at these institutions included winning Towson University’s Talent Competition, performing the Weber bassoon concerto in 2013, and the Concerto Competition at the University of Delaware, performing the Hummel bassoon concerto in 2017.  Through nearly a decade on bassoon, Collin has performed with numerous ensembles including the local Mid-Atlantic Symphony and Columbia orchestras, the Newark Symphony Orchestra, and many university orchestras, wind ensembles, and chamber groups at the schools he attended; he was a finalist in the 2018 York Symphony Orchestra principal bassoon audition.

While studying at the University of Delaware, Collin also took secondary instrument lessons for oboe with Jeffrey O’Donnell, former principal oboist of the Delaware Symphony Orchestra.  Having started pursuing music on clarinet and later exploring saxophone, he is an accomplished woodwind doubler with a strong background in double reed instruments, including contrabassoon.  Over ten years ago, Collin was also a student right here at Mike’s Music taking lessons for clarinet, saxophone and bass guitar through junior high and high school.